READ OUR LATEST UPDATE ABOUT THE FURLOUGH SCHEME BY CLICKING HERE

Chancellor Rishi Sunak has confirmed that the UK Coronavirus Furlough Scheme will finish at the end of October 2020. 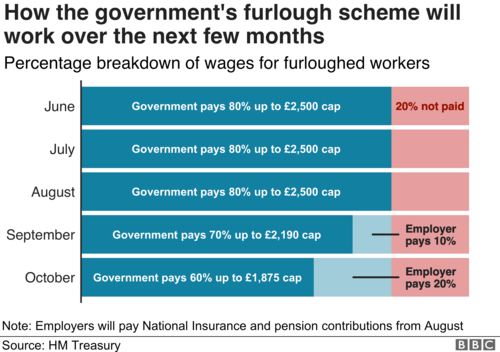 Workers will also be allowed to return part-time from July but the employer will have to pay 100% of wages. Mr Sunak said the Coronavirus Job Retention Scheme will adjust so "those who are able to work can do so". Some 8.4 million workers are having 80% of their salaries paid for by the government - up to £2,500 a month - under the scheme, which was originally intended to last until the end of July.

"After eight months of this extraordinary intervention of the government stepping in to help pay people's wages, the scheme will close," Mr Sunak said.

The Chancellor went on to explain that it was a "delicate balancing act" slowly withdrawing a very expensive government support programme without crashing the economy.

The chancellor says the government can't go on meeting the full cost of the furlough scheme. But the withdrawal is more gradual than many had feared and the government hopes that the supported withdrawal will be mirrored by business demand recovering. We may be about to find out how many real jobs are left in the post-coronavirus economy.

Employers' claims under the scheme have reached £15bn so far, however, the scheme is expected to cost a total of around £80bn, or £10bn a month. The Office for Budget Responsibility is set to publish detailed costings next week.