The benefits of hiring contractors

How do you build a hospital in nine days? Especially the UK's largest hospital facility...?

That is precisely what has happened at East London's ExCeL exhibition centre which has been converted into a 4,000-bed treatment centre for patients needing intensive care. 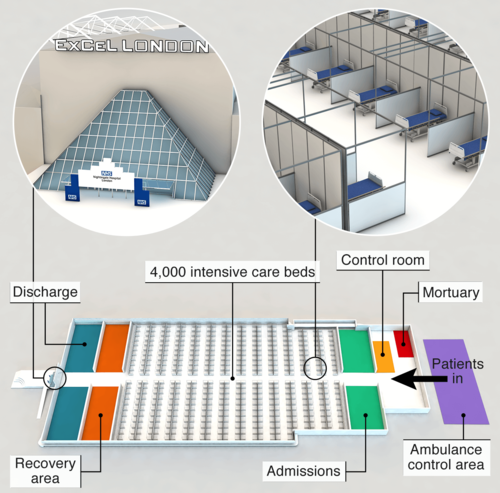 In just nine days, hundreds of army engineers alongside contractors and NHS staff have fitted out the 87,000 square metre facility with the framework for around 80 wards, each with 42 beds. There already 500 beds fully equipped with oxygen and ventilators ready to go and there's space for 3,500 more if needed.

If the hospital did reach its full capacity, it would be one of the largest in the world. 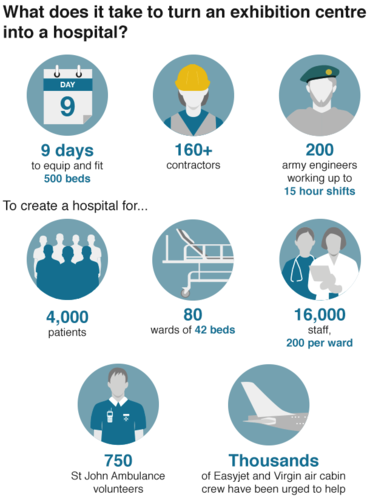 The design team worked around the clock and were still finessing the design right up until build time. The framework for the individual bed bays we made from materials used to make exhibition stalls; this was chosen as it is lightweight and easier to put together.

One of the Lead Engineers on the project revealed the three main challenges of the project were;

The ExCeL's electrical infrastructure had to be modified to make sure that it can cope with the demand - and not drop out. Temporary generators and oxygen tanks, maintain the supply, have been installed.

The company leading the project has documented its process coming up with an instruction manual which it is sharing with other countries to help them with similar emergency projects.

There are already plans for several more Nightingale Hospitals across the UK in Glasgow, Manchester, Harrogate, Belfast, Birmingham and Bristol, some are already operational.