The benefits of hiring contractors

APSCo's recruitment trends snapshot is based on data supplied by analytics company cube19.

This month they have shared some more granular data which shows more detailed metrics week by week for the month of March to show more clearly the initial impact of the COVID-19 crisis.

"While many firms have paused the hiring button, they have not yet pressed stop, and we are hearing from members that although this is undoubtedly a really tough period, there is definitely hiring still going on. There are obvious sectors such as life sciences, legal, healthcare and logistics but also our members have reported activity in areas such as finance, HR, marketing and engineering. While it is still far too early to predict when the bounce back will come, we have been very clear in our conversations with Government that the recruitment profession will play a vital role in getting UK plc back on its feet again." 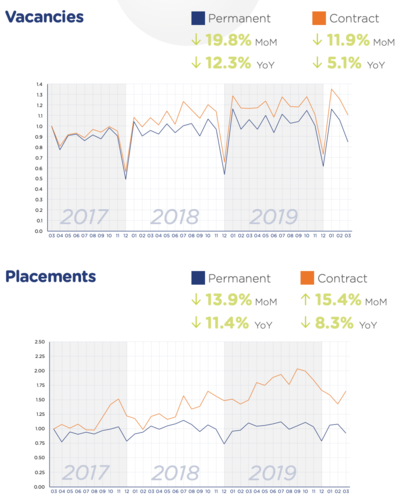 These month on month and year on year figures show unsurprisingly that the COVID-19 crisis is having a marked negative effect on the hiring market. However, these figures will not fully reflect the Job Retention Scheme, which was announced on the 20th March – or the guidance issued later in the month, which allows recruiters to furlough agency workers. Consequently, there will be a much clearer picture once we have April's data to see whether these measures have made a difference.

March Data – New hiring activity down – but definitely not out

Cube19 has been tracking activity on a day by day basis during March and although we are seeing weekly falls in activity – we are nowhere near the zero mark. 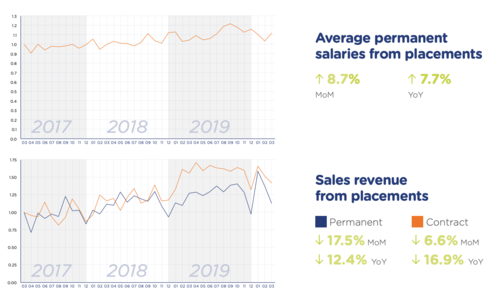 With a work from home policy closely followed by a lockdown, these percentage falls in new vacancies are not surprising given the significant upheaval in working practices. Permanent new jobs as at the end of March are down by half compared with the same week last year, and contract vacancies are down just over 40% although there was a slight uptick right at the end of the month. 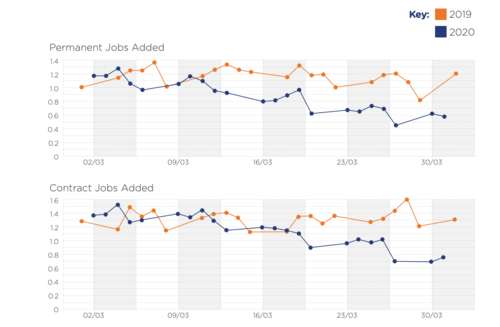 In the last week of March, interviews were down by just over 50% compared with the same week the previous year, which given the work from home and social distancing measures put in place, is a sign that hiring managers are utilising technology to ensure that some interviews can still take place.

Revenue from permanent sales was down by 30% and from contract sales by just over 35%. Revenue will obviously continue to be negatively impacted as we head further into the crisis, but some of this should be able to be offset by the job retentions scheme for both recruitment agency staff and agency workers. 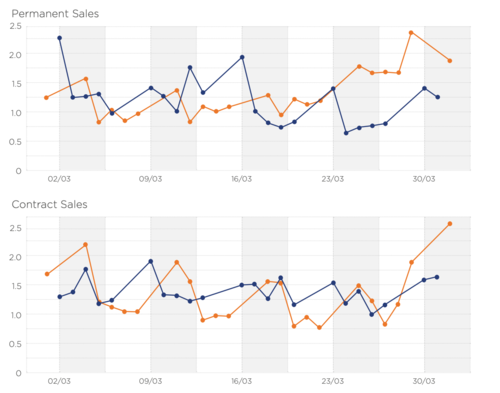 "Given the circumstances, one would be forgiven for feeling like the market had almost come to a standstill. Far from it, there is still reasonable business being written in the recruitment industry. While certain sectors have been hit much harder than others, it's noticeable that perm jobs have been significantly more affected than contract with the year on year comparisons showing a decline of 12% and 5% respectively. The daily leading indicators - jobs & interviews - would indicate a tough month ahead, although many recruitment businesses are showing great agility by refocusing attention into complementary industries that aren't as impacted. The jobs added statistic as we move through April is going to be the one to watch."